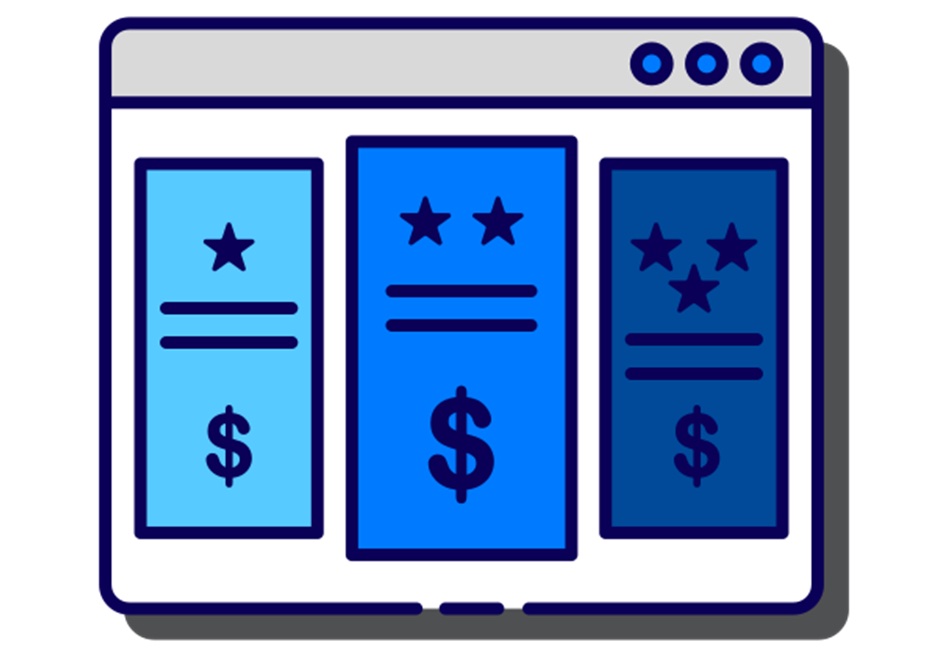 Deciding to purchase a car wash is an enormous decision. As a purchaser you want as complete of a picture as possible. The usual boxes to be checked, being site location, current financials, traffic patterns, equipment quality and age, these are well documented with resources on how to evaluate such widely available. However, what about membership programs? How should, and can, the data surrounding a pre-existing membership program be used when evaluating the purchase of a car wash?

Nearly all car washes stand to benefit from the launch and proper implementation of some form of membership, loyalty, or unlimited program. The key word here is PROPER. Truth is, like most things, if done incorrectly, memberships programs don’t work. The culprit responsible for most lackluster membership programs is improper structure and implementation, most typically and specifically being at least somewhat pricing related.

In For a Penny, In for a Pound

The single attribute that makes the largest difference in whether a car washes membership program will be successful is the level of commitment the ownership has towards making it a success. It’s truly a practical embodiment of the adage “in for a penny, in for a pound”. One must either do memberships, or not. One can’t “kind of” do membership. Making a less than full hearted, concerted, and committed effort will result in not only a small membership program, but one that consists entirely of the least desirable members. The very nature of membership programs, the same as memberships in airlines, gyms, and other industries, is self-fulfilling and inevitably ends up being based upon the principal of adverse self-selection.

When laid out properly, demystifying membership program success becomes a trivial exercise. Below is a rudimentary, yet illustrative, portrayal of the segmentation of car wash customers for a given wash and the value proposition they feel when presented with a membership or loyalty program offering.

As shown, the “heaviest users” (those that consistently wash most often), will always be members, hence them being an indiscriminate “YES” in the bottom row of the table. It’s important to note they’re a “Yes” regardless of how memberships are priced. The overall resulting relative size and cohort constituencies which make up a resulting membership program population based upon pricing is best visually demonstrated. 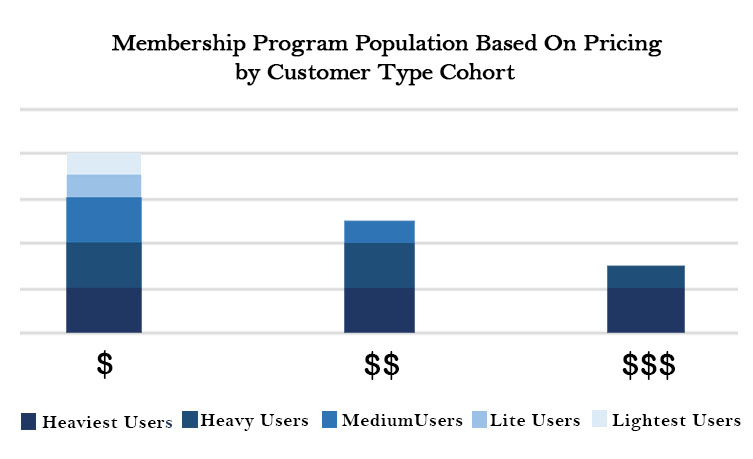 The darkest of blues, being that of the “Heaviest Users” are present no matter the membership pricing level and structure. Practically speaking, it’s impossible to price a membership program at a level for which the value proposition to this population doesn’t make sense.

The reason why memberships work, and why car wash loyalty program are indeed the correct course of action for the vast majority of car washes out there, is that when done and priced properly, the wash will convert the more attractive and higher value customers, that being the “Very Lite” and “Lite Users”, into members.

The golden goose of car wash memberships programs is when a customer who otherwise washes once every three months opts into a monthly membership. The reason a washer of such frequency would opt into (and retain) membership despite them typically washing so infrequently is because the membership offering is priced at such an attractive rate that they just can’t rationalize not being a member. All else equal, even if membership is priced at 1x single wash ticket price, over the course of twelve months, annual lifetime value and sales from this customer has been increased by 3 times (1x pricing 4 times a year versus 1x pricing 12 times a year). This of course, as expected, is also where the largest margin expansion occurs from a profitability perspective in relation to membership programs as well. It’s this, the conversion of these “Lightest” and “Light” users into members, that offsets and drowns out the potential downside and relatively lower attractiveness of the unavoidable “Heavy” and “Heaviest” users. Of course, this is done in synchrony with increasing top and bottom line by the most significant extent.

It’s important to keep this top of mind when analyzing the state of a current membership program in place at a wash being evaluated for purchase.

Other Causes of Membership Program Failure

Although incorrect pricing is the most common reason membership programs fail to be successful, there are many other causes. Other reasons include marketing strategy and implementation, customer service, and the value-proposition / sales approach (whether by person or digital means). These other causes are not only less frequently responsible, but they are also far more qualitative and therefore more difficult to gauge when evaluating a car wash for acquisition purposes.

The conclusions that can be drawn from a pre-existing membership program depends on the state and level of success of the current program.

A successful and thriving membership program provides a car wash purchaser and future owner with a customer base that’s “theirs to lose”. If a new operator and owner, whether under the informal tutelage of the current owner through transition, the reverse learning from a shared unchanging site manager, or just from personal efforts, decides to make no changes; current membership levels provide a floor as to what the new owner and operator can expect moving forward. This of course is limited to times of stability, on both a micro (new competition) and macro (state of the economy) basis.

The mere existence of a failing or subpar membership program alone is not enough to draw any conclusions. The valuable insight lies in understanding why the membership program is not doing well. Of course, the first thing to check for is for incorrect pricing. But the other potential reasons and causes should be understood and explored as well.

If a new prospective owner is not willing to make changes to what is currently causing subpar program performance, this new owner should not expect a change in membership adoption. If the new owner is able to identify the root cause of a membership failure, and does want to put forth the resources to correct such, membership can and will revert to its proper level and potential.

The numbers, figures, and attribution rates of a subpar membership program alone provide no information nor value to a prospective purchaser. It’s the reasons why it’s performing as so that allow a purchaser to be confident in their future projections and ability to change current performance.

Lastly, some car washes currently have no membership program of any sort in place. The non-existence of a membership program at a car wash is not a negative. Rather, it establishes an even stronger and more meaningful proverbial “floor” of performance than a successful membership program provides. The reason for this is because non-members are actually more resilient and “loyal” than members are over the long-term and through exogenous shocks to the system. The details as to why this is the case is a topic for which academics and tangential industry experts have written on and explored for decades. But suffice it to say that consumer affirmative purchase actions (non-member single wash purchases) are stronger revenue sources than that of purchases due to a lack of action (members on recurring programs). This higher level of predictability which can be attributed to non-members over the long-term is the reason that the non-existence of a membership program actually allows a prospective wash purchaser and future owner to put heavier and more confident reliance into financial figures when modeling and projecting for the long term or any downturn based pressure.

Many prospective purchasers looking to get into the car wash business view a wash without a membership program as being a red flag and sign that membership programs “don’t” or “wouldn’t” work at that wash and site due to some nebulous and intangible reasoning. Do not fall into this trap as that is truly never the case. Everything in life is easier said than done and it is often the case that a car wash operator simply doesn’t want to make the leap of faith and devote the resources required to do membership and do it properly. It is true that there are instances where a wash would incur net margin compression due to the introduction of a membership program, but the absolute levels of profitability (in addition to topline) would increase simultaneously, resulting a overarching and significant net positive for the owner.

The most often cause of there being no membership program at a car wash is the current owner not getting around to it, not due to memberships “not working” or being “viable” at that specific wash.

The existence and state of a car washes’ membership program does provide an additional valuable datapoint when evaluating a car wash for purchase or acquisition. It’s most important to realize that this datapoint, and the reliance that can prudently be placed on such, is nuanced and specific to the current level of performance and state of the membership program itself.